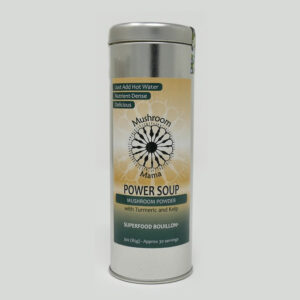 “Power soup added to bone broth is my favorite superfood of all! It has literally kept me alive at times!” – Ana

Turmeric’s active compound, curcumin, has powerful anti-inflammatory and anti-oxidant properties. Chronic inflammation is known to be a contributor to many common western diseases and many studies show that curcumin inflammation, including arthritis. And because nearly all diseases and ailments can be traced back to inflammation and oxidative stress…it seems like there’s almost nothing that turmeric can’t heal.

Cordyceps,sought out as an aphrodisiac and sexual tonic, is especially useful in alleviating fatigue, enhancing physical endurance and mental acuity. These medicinal mushrooms help rid the body of free radical activity and have displayed a capacity to lower bad LDL cholesterol as they raise the good HDL cholesterol level.

Maitake medicinal mushrooms have been used by traditional healers in Asia for thousands of years. Researchers in Japan have been studying the effects of Maitake mushrooms on the immune system, cancer, blood pressure and cholesterol levels. Maitake is touted to have anti-tumor, anti-diabetic and anti-viral properties.

Red Reishi’s medicinal use dates back over 4000 years. In ancient China, Reishi was referred to as the Mushroom of Immortality and eaten exclusively by royalty due to its rarity. This medicinal mushroom enhances the body’s immune system, improves blood circulation and is excellent for many heart conditions.

Shiitake, native to China, have been eaten for nearly 6000 years. Considered the elixir of life, during the Ming Dynasty, they were reserved for the emperor and his family. Studies are showing these nutrient-dense medicinal mushrooms strengthen the immune system and are beneficial for those individuals infected with HIV.

Lions’ Mane mushrooms are drawing the attention of researchers for their nerve-regenerative properties. These are not your ordinary-looking gilled mushrooms. Instead, lion’s mane display cascading spines. This nutritious mushroom is roughly 20 percent protein and tastes a bit like seafood.

Turkey Tail: For hundreds of years, these mushrooms have been used to treat various diseases in Asia, Europe and North America. Though, most likely, our ancestors knew of their medicinal value long before it was recorded, we know medicinal tea was enjoyed as early as the 15th century, during the Ming Dynasty in China.

Black Pepper’s key compound is piperine. It is akin to capsaicin in chili and curcumin in turmeric. Black pepper enhances the bio-availability of turmeric. That’s why it is an ingredient in this awesome medicinal mushroom boullion powder.Type a description for this product here…